Replicating that perfect piece of meat, every time, without fail

Everyone knows the bitter disappointment from biting into a delicious-looking piece of steak only to discover it’s tough and full of gristle. The lovely New York strip that sizzled tantalizingly on the grill turned out to be a far cry from tender, forget flavorful— dinner is ruined!

Does it have to be this way? With cultured meats, the answer is no.

That’s because when steaks made using technology from Steakholder Foods, formerly MeaTech 3D, become available – and that day is not too far in the future – consumers can walk into a Whole Foods or a Costco or their favorite restaurant and order exactly what they want in a piece of steak. Choose the exact cut of beef with the exact amount of fat desired – and with zero gristle. A party host might order 10 or 20 cultured steaks online, all made to order, and each one exactly like the other. Restaurants may offer a variety of cultured steaks with a variety of features that appeal to different tastes. No more inferior cuts of beef.

Although it has never before been applied to steak, reproducibility in manufacturing is a longstanding concept. Eli Whitney created the idea of interchangeable parts so rifles could be put together quickly and easily in 1798. More than 100 years later, Henry Ford designed the Model T so it could be manufactured in mass quantities. The results were spectacular, as Ford simultaneously lowered costs and improved quality.

Fast forward another century, and Steakholder Foods’, formerly MeaTech 3D, systems may do for steak what Eli Whitney did for the rifle and Henry Ford did for the automobile— automate the production of cultured meat products so the results will be predictably spectacular every time.

Steakholder Foods, formerly MeaTech 3D, vision for the factory of the future. To make a premium cultured meat steak cells would be grown in (A) bioreactors and used to formulate bio-inks. These bio-inks would be loaded into (B)Steakholder Foods, formerly MeaTech 3D, unique 3D bioprinter, where they would be printed in a steak structure. The printed products would be placed in an (C) incubator so the cells could form meat tissue. 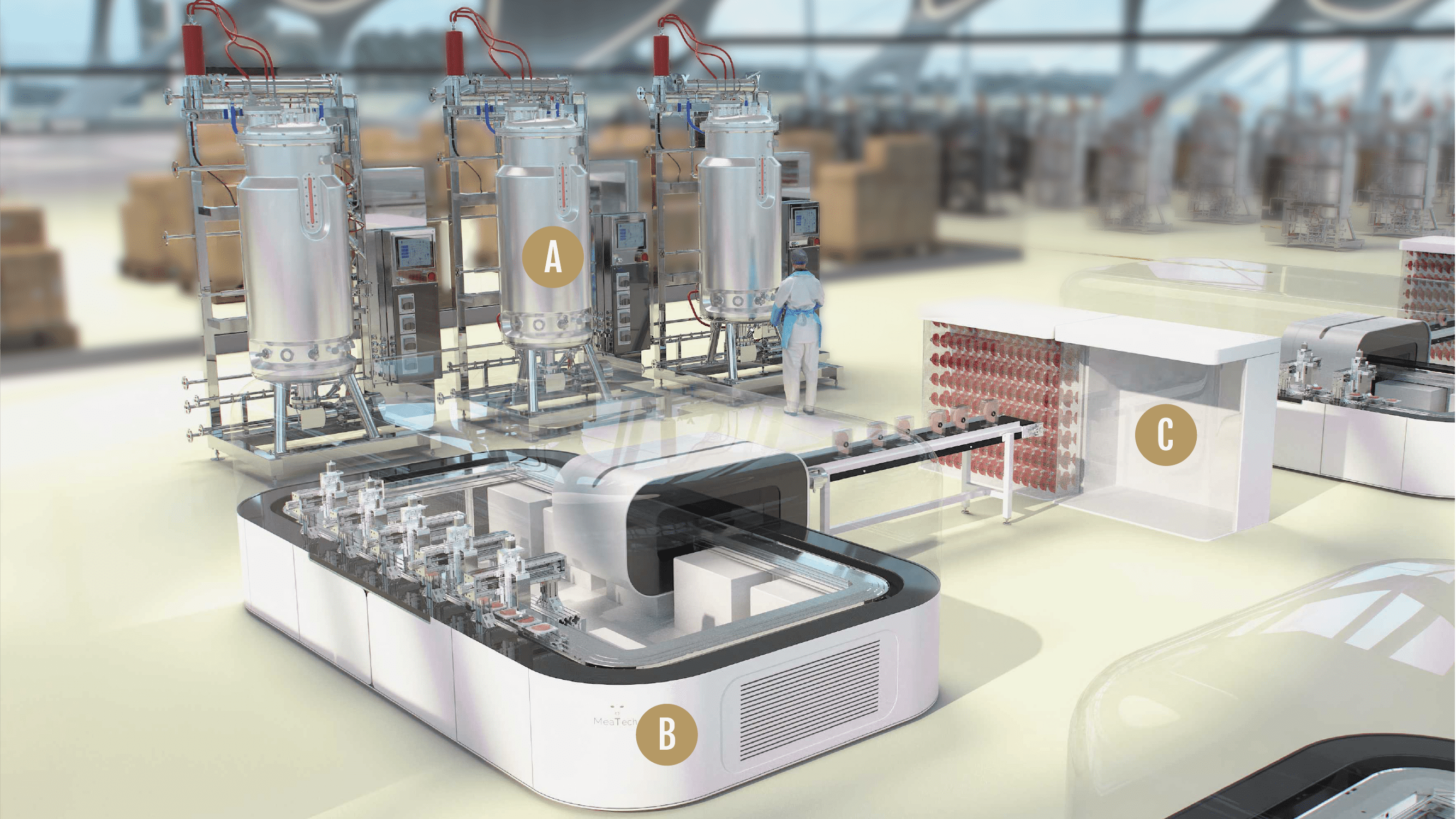 How is this accomplished?

Stem cells are harvested from the umbilical cords of the best beef cattle, ensuring no harm is done to the mother or her calf. This sample of cells is brought to the “farm of the future”, where they are multiplied by the billion in bioreactors, which are essentially stainless-steel stand-ins for living cows. Some stem cells will become muscle; others will become fat. After the cells propagate, they would be fed into a bioprinter where they are precisely printed, layer by layer, into the shape and composition of the ideal steak. This creates the physical meat structure for the third and final stage of the process, in which the newly printed steak structure would grow and mature into a delicious piece of real meat ready to eat. The only way to differentiate a farm-raised steak from a bioprinted, lab-grown steak in the grocery aisle would be the recognizable consistent quality of the bioprinted and lab-grown version.

The beauty of this process for companies that will buy or license Steakholder Foods, formerly MeaTech 3D, technology is that it is reproducible. Every steak created could be reproduced as the design of each steak is computer-generated to exact specifications and then fulfilled with the bioprinter. If a lean steak is desired, a steak with very little marbling could be produced. If a more tender and tasty steak is requested, the fat content could be adjusted accordingly. Custom steaks, made to order every time. It makes no difference if they are made once or a million times.

Henry Ford said, “Any customer can have a car painted any color that he wants, so long as it is black.” This was because it would be too expensive and time-consuming to introduce a variety of colors on the production line. With cultured beef, however, there are no restrictions. Customers could have any steak they want, and they could have it over and over and over again, as many times as they want. That’s because cultured meat is the perfect meat, and it’s perfectly reproducible.