The Business Case for Clean Meat: A Sustainable Solution for Meeting Future Demand

Clean meat, also known as lab-grown meat, refers to meat that is produced in a laboratory or other controlled environment using animal cells. It is a type of cellular agriculture, which is the use of cell cultivation techniques to produce food from cells rather than from whole animals.

As the global population continues to grow, so does the demand for food, particularly meat. By 2050, the world’s population is expected to reach almost 10 billion people, and meat production is projected to double. At the current rate, it may be impossible to meet this increase in food demand, as land and other natural resources will be pushed to the limit. To meet this increased demand, the agricultural industry must find sustainable solutions for food production.

Current factory farming methods for meat production are already putting a significant strain on our limited land, water, and air resources. If the demand for meat continues to rise at its current rate, it may be impossible to sustain traditional farming methods. This is where clean meat, also known as lab-grown that can be produced also by printing which called: 3d printed meat, comes in as a potential solution.

Clean meat is produced by ethically harvesting cells from animals and growing them in a lab, rather than raising and slaughtering animals. This process eliminates the ethical concerns associated with traditional farming methods and has the potential to be much more environmentally friendly. Studies have shown, according to Environmental Science & Technology, that clean meat production requires up to 45% less energy, 96% less water, and can reduce greenhouse emissions by as much as 96% compared to conventional animal farming.

The potential for clean meat to be produced from a small number of animals without causing them any harm, gives rise to the possibility of considerably higher returns than traditional agriculture. The new wave of lab-grown meat, provides an exciting set of options that can help transform the agricultural industry and meet the protein needs of future generations sustainably.

From an economic perspective, the alternative protein industry is experiencing significant growth. In 2020 alone, clean meat companies disclosed raising $366 million, and since 2016, over $500 million has been invested in this industry. According to BIS Research, the cultivated meat industry is expected to reach $94.54 billion by 2030. 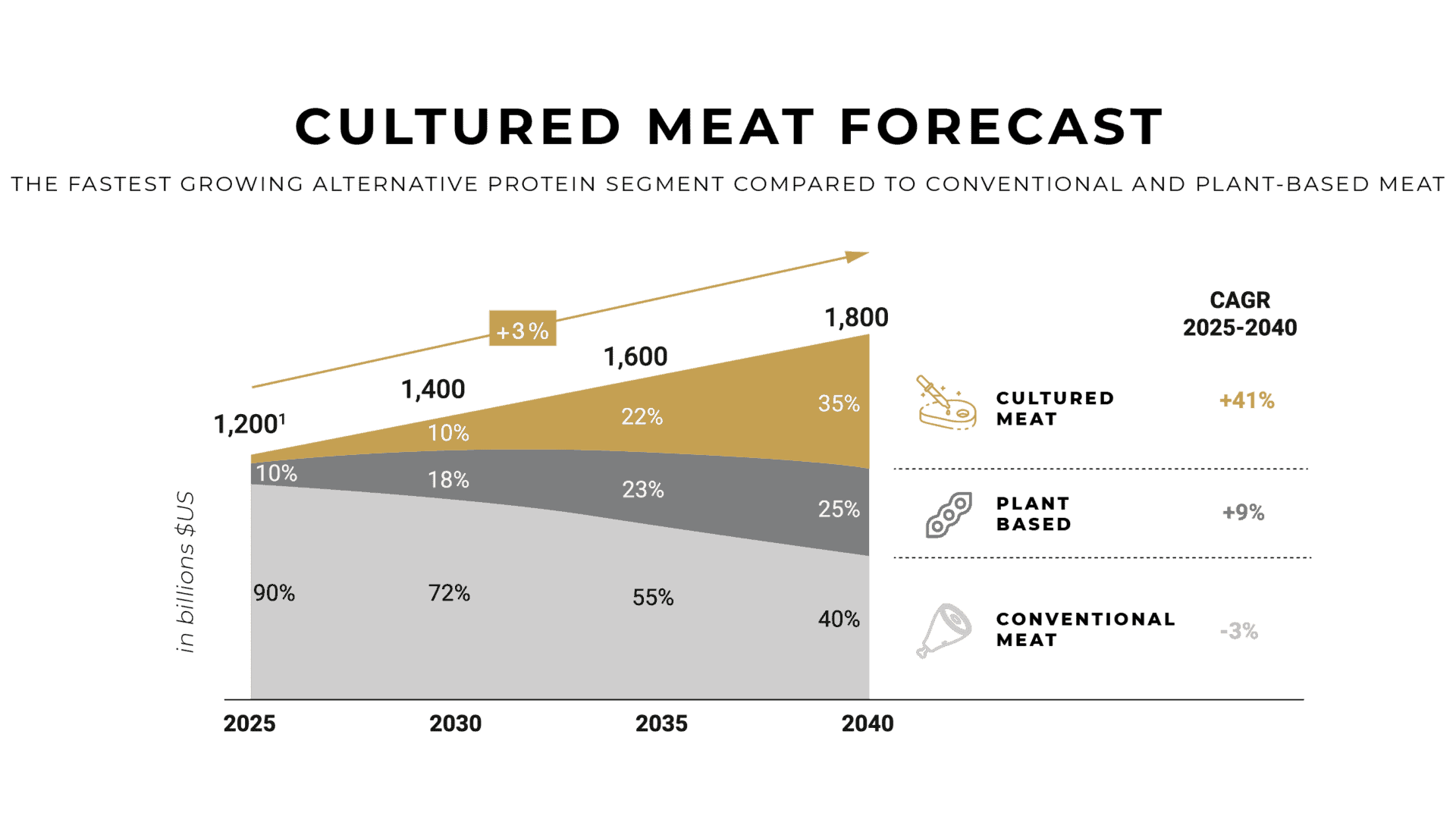 Although still in its infancy, lab grown meat is poised to disrupt the traditional agricultural industry as the alternative protein industry captures greater market share. As consumers become more aware of the environmental and ethical implications of their food choices, they are increasingly seeking out sustainable options. A recent market research report by A.T. Kearney predicts that cultured meat will make up 35% of the global meat market in the next 20 years.

The challenge of meeting the protein needs of future generations sustainably is daunting, but it is achievable if the agricultural industry thinks differently and embraces new and innovative solutions such as clean meat. By investing in this type of meat, companies can not only reduce their environmental impact, but also tap into the growing market for sustainable protein options and secure their future in a rapidly changing world. The new wave of alternative proteins and the vision of what they can deliver in the future provide an exciting set of options that can help with this transformation.

This new meat has the potential to create jobs and investment opportunities in the food industry. Clean meat production is still in its early stages, but it has the potential to be scaled up in the future. There are several obstacles that need to be overcome, including reducing the cost of production and increasing the efficiency of the process. However, many experts believe that clean meat will be widely available in the marketplace within the next decade.

Safety and Perceptions about clean meat

Consumer perception of clean meat has evolved over time, and research shows that more and more consumers are willing to try it. Surveys and studies have found that consumers are interested in clean meat because it is sustainable, ethical, and more environmentally friendly than traditional meat. However, some consumers may have concerns about the taste and texture of clean meat, as well as the price.

Clean meat offers a novel methodology that keeps production clean. This type of meat will be nutritionally similar to traditional meat and can be produced using safe, well-established techniques. However, it is important to note that there are still regulatory challenges that need to be overcome before clean meat can be widely available in the market. These include obtaining approvals from government agencies and establishing food safety standards.

In conclusion, clean meat represents a promising solution to the growing challenge of meeting the world’s increasing demand for meat in a sustainable way. With its potential for reducing environmental impact and animal welfare concerns, clean meat has the potential to be a more ethical and environmentally-friendly alternative to traditional meat production. Additionally, the alternative protein industry is experiencing tremendous growth, and clean meat is poised to capture a significant share of the global meat market. From an economic perspective, clean meat represents an opportunity for companies to tap into the growing market for sustainable protein options and secure their future in a rapidly changing world.